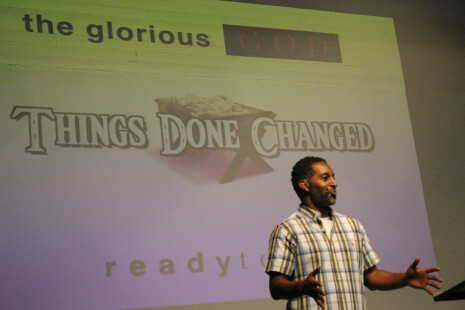 Who knew that the mention of a split veil could turn into such a poignant message of realizing that things will never be the same again? Pastor Radcliff! Just in case you were wondering. It was another awe-inspiring Sunday as the shepherd of the Message Center hit us with another installation of his Ready to Die sermon series, entitled, Things Done Changed.

Throughout the sermon series, Pastor has spoken to the death of Jesus, specifically the things surrounding his death. The past few weeks have been quite the journey through Matthew 27. It’s as though Pastor has taken a piece of Van Gogh art and forced us not to simply see the blending of colors, but to notice and acknowledge the minute intricacies we may have missed by the marvel of the overall masterpiece itself. He brought to life the idea that what happened to Jesus is an event for which we may recognize and honor, but in have no true reference for.

His examples of old stores, banks, and markets that were around 10 or 20 years ago, but that have long since been closed or shut down, proved to be more than effective. “You might know the names of these stores,” says Pastor, “…but you’ll never know the experience.” It was such a realistic and relevant analogy for how we view Christ. We have no reference to being at Calvary and watching this phenomenal prophet, teacher, and ultimate son of God die for our sins.

Yet, what’s so important about the veil? Great question! In a time where clothing is nothing more than a credit card swipe away, we often forget that clothes (and even their colors) represented more than just a fashion statement. It was a sign of position. From a servant to royalty, clergy to a thief, clothes played a significant part in biblical cultures. It was common for a father to rip his outer robe at the news of a son’s death. A point that Pastor so eloquently explained as he helped us to see that the ripping of the veil during Jesus’ death was about the ripping of a representation of position or status. It was God’s way of ridding himself of pomp and circumstance to reveal the ultimate sacrifice and glory that was, and is, Jesus Christ. It is God’s naked exposure to the people He has declared to love and bring back to Him.

Can you imagine someone in your life with a high-paid position, who loved you so much that they would bare all for the world to see? Who would do this simply because they love you so intimately and intricately? All because you mean that much to them? That is what God did with Jesus and the ripping of the veil. It was the release of God’s glory and presence being able to flow freely throughout the world. It was a representation that God is not simply bound by four church walls or the songs in the key of E flat, but that He is everywhere; accessible to all who believe in and love Him. His presence can abide in any place that needs Him, through His son, Jesus. The ripping of the veil and the sacrifice of Christ represented a time of change that can not be undone. A promise and a declaration of love that we should not allow to fade and dissipate back to business as usual.

As Pastor Radcliff brought his sermon to an end, he reminded us that a life with Christ is one with many peaks and valleys. Some humbling lows and more than rewarding highs. However, when we walk with Christ, a decision of great magnitude must be made. We must ask ourselves, “Am I ready to die?” We know that death is a mortal part of living. It can be a detrimental moment for many of us, but what a joy to know that those who are prepared to die with Christ can and will live with Him in glory!

There are a lot of things this writer is prepared to do: be successful, live life in a forward motion, and finally see the wonderful streets of Paris. I’d even give up on Coke-Cola and Reece’s (ok maybe ONE Coca-Cola and Reece’s for my birthday). However, leaving this earth without knowing Christ or exemplifying him through my actions is simply not something I’m prepared to do. Pastor Radcliff may have only been the messenger, but this installment of his Ready to Die sermon series was a call to action that many of us simply will not be ignoring. I’m sure I’m not by myself when I say, “I’m ready to die with Christ…..I hope!” Now....what on earth is next week going to bring?