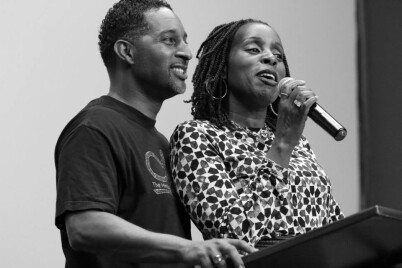 Dwight Radcliff is a husband, father, pastor, teacher, mentor, preacher and evangelist.  He is a gifted communicator, passionate teacher and anointed preacher.

Pastor Radcliff holds a Bachelor’s Degree in Biblical Studies (with highest honors) from the Long Beach Bible College, and a Master of Divinity degree from Fuller Theological Seminary (with an emphasis in Multi-Cultural Ministry/African-American Church Studies).  He is the recipient of the Hooper-Keefe Preaching Award and the Parish Pulpit Fellowship from Fuller.  Pastor Radcliff has studied Catholic theologies and origins of preaching in Rome, completed an intensive course in Homiletics and Exegesis at the University of Oxford, and examined Pentecostal approaches to ministry in South America.  He is currently pursuing his PhD.

Pastor Radcliff has over 20 years of ministry experience, more than half of that in full-time ministry.  He is the founder of an annual youth lock-in that has ministered to over a thousand young people across Southern California.  He has lectured in local School Districts on culture, mentoring and adolescence; and in Christian Conferences nationally and internationally on topics ranging from evangelism to theology.  He has ministered in numerous locations as a pastor and evangelist.  He is a former Deputy and Chaplain with the Los Angeles County Sheriff’s Department.  He has received recognition and commendations for his work from city, county and state governmental officials.  He currently teaches courses at the Southern California School of Ministry and serves as a Teaching Assistant in Homiletics at Fuller Theological Seminary.

In April of 2006, God launched him into pastoral ministry, planting the Message Center World Church in the Greater Los Angeles area of Southern California.  The church has grown from a dozen people to nearly 100, and was featured in the L.A. Focus magazine as one of the up-and-coming ministries in the Los Angeles area. The Church is now located in the South Bay area and is known as a place where people are welcomed, loved and taught.  God is using this ministry to do an amazing work in winning de-churched and un-churched people, and discipling them.  Pastor Radcliff has been married to his wonderful wife, DeShun for over 17 years and God has blessed them with two beautiful and intelligent daughters.

Pastor Dwight Radcliff has an uncanny way of reaching those deemed “unreachable’ and transforming the historical accounts of the Bible into relevant and tangible concepts.  He has the ability to drop knowledge and keep it real all at the same time.

We love our pastor!

Real life messages to help in Christian living. A practical presentation of God's word by Dr. Dwight Radcliff, Pastor of the Message Center in Gardena, CA.